Extraordinary Leaders in Diabetes Research, Prevention, and Treatment to be Recognized at ADA’s 82nd Scientific Sessions

Extraordinary Leaders in Diabetes Research, Prevention, and Treatment to be Recognized at ADA’s 82nd Scientific Sessions 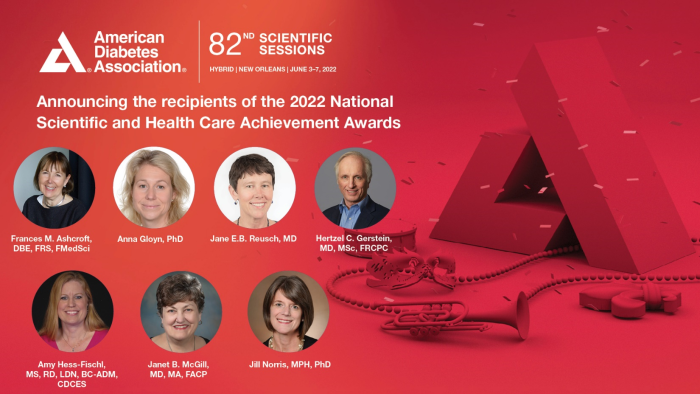 The American Diabetes Association® (ADA) is thrilled to announce the recipients of the 2022 National Scientific and Health Care Achievement Awards. The awards honor academics, health care providers, and educators who have contributed to substantial advances in the field of diabetes care and research. With the help of these leaders and their steadfast dedication, we move closer to achieving the mission of the ADA: a life free of diabetes and all its burdens.

“These seven extraordinary individuals receiving the ADA’s National Scientific and Health Care Achievement Awards have made significant contributions to diabetes research, prevention, and treatment,” said Dr. Robert A. Gabbay, Chief Scientific and Medical Officer of the ADA. “While our awardees come from a variety of educational backgrounds and institutions, they have one very important thing in common: their drive to help us move the needle and create lasting change in the lives of millions. With 537 million adults living with diabetes worldwide and more than 133 million Americans living with diabetes and prediabetes, it is crucial that passionate professionals continue to dedicate their careers to ending this epidemic.”

The following award recipients will be recognized at an awards ceremony to take place at the ADA’s 82nd Scientific Sessions June 3-7, 2022 in New Orleans, LA:

•    Frances M. Ashcroft, DBE, FRS, FMedSci, is the recipient of the 2022 Banting Medal for Scientific Achievement, which recognizes significant, long-term contributions to the understanding, treatment, or prevention of diabetes. Dr. Ashcroft helped define the field of ‘channelopathies’, establishing the role of the KATP channel in insulin secretion, exploring inwardly to the atomic level and outwardly to the mechanism of action of sulfonylurea medications and the etiology of KATP-related neonatal diabetes. Dr. Ashcroft impacted the understanding and treatment of neonatal diabetes allowing transition off insulin injection therapy and organizing the first meeting for families with neonatal diabetes to offer knowledge and community for these families.

•    Anna Gloyn, PhD is the recipient of the 2022 Outstanding Scientific Achievement Award, which recognizes research in diabetes that demonstrates particular independence of thought and originality. Dr. Gloyn is a leader in efforts to discover the genetic basis of Type 2 diabetes. She uses human genetics as a tool to understand cellular and molecular mechanisms for pancreatic beta cell failure in diabetes and related conditions. Her efforts seek to improve understanding of pancreatic islet cell dysfunction to advance treatment options for patients.

•    Amy Hess-Fischl, MS, RD, LDN, BC-ADM, CDCES, is the recipient of the 2022 Outstanding Educator in Diabetes Award, which recognizes a distinguished health professional who has made outstanding educational efforts in the field of diabetes. Ms. Fischl was a co-author of the 2015 and 2020 Consensus Reports for DSMES in Type 2 Diabetes and was a co-author of the 2017 National Standards for DSMES and co-chair of the 2022 revision.  She is the creator of the In Transit program at the University of Chicago where she works with transitioning Type 1 youth in a collaborative care scenario.

•    Hertzel C. Gerstein, MD, MSc, FRCPC, is the recipient of the 2022 Outstanding Achievement in Clinical Diabetes Research Award, which recognizes exceptional contributions in patient-oriented clinical outcomes research that have had a significant impact on diabetes prevention and treatment. Dr. Gerstein co-led the first cardiovascular trial with a large diabetes cohort(MICROHOPE) and his discoveries related to ACE-inhibitors, Thiazolidinediones and Insulin have been transformative in understanding diabetes and cardiovascular outcomes.

•    Janet B. McGill, MD, MA, FACP, is the recipient of the 2022 Outstanding Physician Clinician in Diabetes Award, which is presented to an individual to reward and honor meritorious contributions to diabetes clinical practice. Dr. McGill has been an active clinical researcher in diabetes for over 30 years and continues to test new therapies for diabetes and novel approaches to type 1 and type 2 diabetes. Currently, Dr. McGill is the principal investigator (PI) or sub-investigator on more than 10 clinical trials investigating new treatments for diabetes and its complications.

•    Jane E.B. Reusch, MD, is the recipient of the 2022 Albert Renold Award, which is presented to an individual whose career is distinguished by outstanding achievements in the training and mentorship of diabetes research scientists and in the development of communities of scientists to enhance diabetes research. Dr. Reusch has dedicated herself to training the next generation of physician scientists and to the strengthening the clinical-translational workforce. At the core of her world-class NIH, VA and ADA-funded translational diabetes research program is the mission to recruit, train and retain new translational scientists to the diabetes workforce. She has directly mentored more than 70 students, pre- and post-doctoral fellows, junior and senior faculty.

•    Jill Norris, MPH, PhD, is the recipient of the 2022 Kelly West Award for Outstanding Achievement in Epidemiology, which recognizes significant contributions to the field of diabetes epidemiology. Dr. Norris’ research has focused on the relationship between genes and environment in the development of autoimmune diseases and metabolic disease. She was principal investigator of the Colorado site of the IRAS Family Study, and PI of the Colorado site of the ADA-funded GENNID study, the nutrition studies of DAISY since 1996, and has been PI of the Studies of the Etiology of RA (SERA). She has been co-investigator of the Diabetes Autoimmunity Study in the Young (DAISY) since 1993, the Celiac Disease Autoimmunity Research (CEDAR) study since 1995, and Co-Chair of the Diet Committee of The Environmental Determinants of Diabetes in the Young (TEDDY) Study since 2002.

The ADA’s 82nd Scientific Sessions, the world’s largest scientific meeting focused on diabetes research, prevention, and care, will be held in New Orleans, LA June 3-7, 2022. More than 12,000 leading physicians, scientists, and health care professionals from around the world are expected to convene both in person and virtually to unveil cutting-edge research, treatment recommendations, and advances toward a cure for diabetes. Attendees will receive exclusive access to thousands of original research presentations and take part in provocative and engaging exchanges with leading diabetes experts. Join the Scientific Sessions conversation on social media using #ADA2022