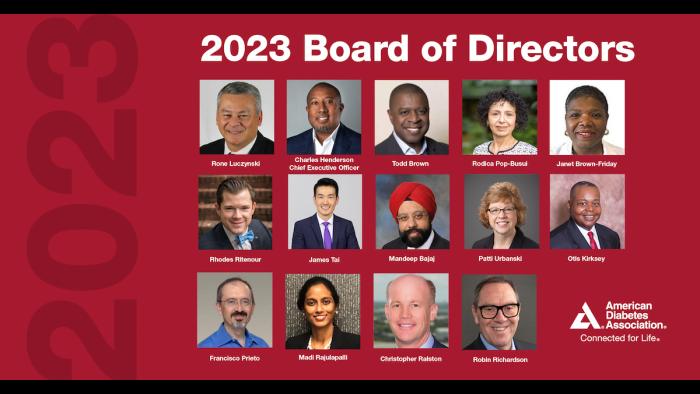 The American Diabetes Association® (ADA) welcomes the 2023 Principal Officers and Board of Directors. The 13-member board is comprised of forward-thinking, innovative medical, scientific, education, and executive business professionals, who will strategically lead and focus efforts to ensure the ADA continues to uphold the mission upon which it was founded.

"We are so excited to announce our 2023 Board of Directors,” said Charles Henderson, CEO of the ADA. “We look forward to the insight and skills that each of these thought leaders will provide to help move the needle and improve the lives of all people living with diabetes. We are also thankful for the service and commitment of our outgoing Principal Officers and Board Members, as they will remain dedicated to our mission at the national and local levels. We are very appreciative of their hard work, dedication, and commitment to fighting for all people affected by diabetes.”

The Principal Officers of the Board of Directors who will start their terms of service beginning this month are:

Rone Luczynski, Chair of the Board

New At-Large Board Members are:

We are thankful for the years of service, dedication, and commitment the following members of the Board whose terms ended on December 31, 2022:

“This talented group of individuals have tremendous experience in a variety of areas in science, medicine, health care, and business,” said Rone Luczynski, 2023 ADA board chairman. “They bring a great wealth of expertise and innovative ideas to the ADA, and we look forward to collaboration and their leadership as we continue to help people living with diabetes thrive.”