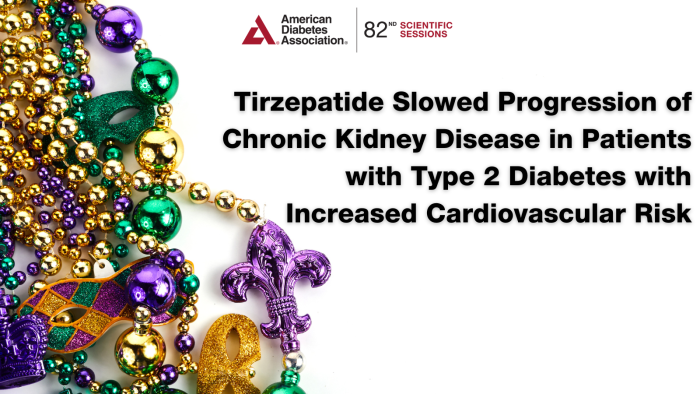 A pre-specified exploratory analysis from the SURPASS-4 trial showed tirzepatide, a novel once-weekly medication for the treatment of diabetes, improved kidney outcomes for adults with type 2 diabetes who have increased cardiovascular risk. SURPASS-4 was part of the SURPASS global clinical development program for Eli Lilly and Company’s tirzepatide. Findings were presented at the 82nd Scientific Sessions of the American Diabetes Association® (ADA).

Chronic kidney disease (CKD) is a common complication of type 2 diabetes, a condition that worsens over time and can cause the kidneys to fail. With one in three adults with diabetes impacted by CKD, there is an unmet need for new therapies to reduce the development and progression of CKD in patients with diabetes.

This pre-specific exploratory analysis of SURPASS-4 evaluated the progression to pre-specified kidney endpoints between tirzepatide and titrated daily insulin glargine (iGlar). The rate of decline in kidney function and urinary albumin excretion were used as outcomes. The clinical endpoint was a decline of 40% or more from baseline, renal death, progression to end-stage renal disease analyzed with and without new onset macroalbuminuria as additional component. A total of 1,995 patients were enrolled, with a mean age of 63.6 years and blood glucose (blood sugar) level, or A1C, of 8.5%. Patients were followed up to 104 weeks.

The results show tirzepatide participants experienced fewer renal complications, compared to those that received insulin. In particular, the rates of new onset of macroalbuminuria, a signal of poor renal outcomes, were significantly lower in the tirzepatide arm (Hazard Ratio = 0.41). Additionally, in individuals with type 2 diabetes and high cardiovascular risk, tirzepatide reduced the rate of kidney function loss and the amount of urinary protein excretion, a risk marker for progression of CKD.

“With these exploratory findings of SURPASS-4, we are seeing the results of combined GIP/GLP-1 receptor agonists on the kidney function of patients with type 2 diabetes for the very first time,” said H.J. L. Heerspink, PhD, PharmD, University Medical Center Groningen, Netherlands. “The findings will be of interest to physicians treating people with diabetes who may have chronic kidney disease”

Tirzepatide is a novel, once-weekly injectable glucose-dependent insulinotropic polypeptide (GIP) and glucagon-like peptide-1 (GLP-1) receptor agonist that integrates the actions of the GIP and GLP-1 incretins into a single molecule, representing a new class of medicines for the treatment of type 2 diabetes. In the U.S., tirzepatide is indicated as an adjunct to diet and exercise to improve glycemic control in adults with type 2 diabetes.

Research presentation details:
Dr. Hiddo L Heerspink and study investigators presented the findings of the trial during the session listed below:

For more information, please contact the ADA Scientific Sessions media team onsite at the Ernest N. Morial Convention Center from June 3–7 by phone at 504-670-4902, or by email at SciSessionsPress@diabetes.org.