Thank You To Our Supporters and Philanthropic Supporters

Partners on the Pathway to Stop Diabetes 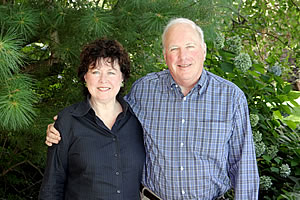 Linda and Pete Cummin believe some of life's most momentous successes are accomplished through strong partnerships. It is a principle the Greenwich couple abide by in their marriage, professional endeavors, philanthropic efforts, and in their personal fight against diabetes. Pete was diagnosed with type 1 diabetes over 50 years ago. As a junior in college, he took some steps to manage his disease, but the prominent venture capitalist readily credits Linda for helping him make decisions that impact his health in a positive way.

"Support from a spouse and from other loved ones is paramount to controlling ones diabetes," Pete said. "There has to be a real partnership between couples, and Linda has always cared in a way that is not overbearing."

Linda is quick to agree with her husband's assessment of the value of teamwork. As she has done consistently throughout the couple's 40-year marriage, Linda dedicates much of her time to learning everything she can about diabetes. Along the way, she studied scientific publications, attended conferences, and read countless books and articles about the devastating disease. She also taught herself how to cook and devised her own system for nutritional counting.

"It is absolutely terrifying when someone with diabetes is not in control of the disease. It terrified me when Pete had seizures and that terror motivated me to act in his best interest and to work with him to find solutions. For example, if I see him eating something with a high sugar or carb count, I never think, "Wow, my husband is being bad." Instead, my thought is, "That choice is going to increase his glucose level," and then I think of ways to help him get those levels back to a healthy range.

Linda's quest for the latest knowledge about diabetes care stemmed not only from her desire to help her husband, but from wanting to help her mother as well.

"My mother had type 2 diabetes and was disabled much of her life because of inadequate education about the disease," Linda recounts. "Then a very special thing occurred when I attended an American Diabetes Association national meeting that coincided with the Association's annual Scientific Sessions."

At one of the lectures, Linda discovered that some people with type 2 diabetes experienced significant health improvements when taking insulin in addition to oral medication. Armed with that valuable information, Linda was able to guide her mother toward a life-changing path. "With the addition of insulin, controlled nutritional meals, and the support of her caregivers, my mother went home to a new life. Her hemoglobin A1C dropped from 9 to 5.8. I believe that had she only known the importance of insulin and nutritional counting earlier in her life, she would not have suffered the stroke that caused her blindness and bound her to a wheel chair."

More than two decades ago, the Cummins received a piece of mail that led to another partnership—this time with the nation's only organization committed to helping children and adults with all types of diabetes and those individuals at risk for developing the disease. The solicitation letter from the ADA resonated with the couple and Linda suggested they become more involved. They made their first financial gift to the ADA shortly thereafter of $10,000.

"At first, we had no idea if that gift would help us or anyone," said Linda, "but we knew that we should give something to the major organization that supports this dreadful disease."

Throughout the years, their contributions grew and the time they spent volunteering increased. Pete served as a member of the National Board of Directors and was recently the secretary/treasurer of the ADA. He was an active member of the Research Foundation Board and serves as the secretary/treasurer of that Board and has served twice as vice-chair. Linda is also a faithful volunteer on the Foundation's Pathway to Stop Diabetes campaign committee, and they both volunteer with their local ADA office and help raise funds for diabetes research. "The more we become involved, the more we feel the support of others involved with the Association. This helps us find more individuals who are interested in donating to research and also helps us make a greater impact in the lives of others who have diabetes," Linda shared.

The Power of Research

While the Cummins champion the ADA's initiatives in the areas of advocacy, education, health care programs, and other worthy efforts, diabetes research remains closest to their hearts.

"As someone who has lived with diabetes for more than 50 years, I've experienced many changes in the way diabetes is treated and each change has made managing my disease easier. Those significant advancements are only possible because of dollars spent on research," said Pete while recollecting some of the challenges that used to come with managing diabetes.

"Scientific studies like the ones the ADA sponsors contributed to knowledge that led to life-changing inventions," he continued. "When I was first diagnosed, the measurement tool was urine test strips and the results were not well-defined. If the strip changed to a dark color, it simply meant there was a lot of sugar. My tests seemed to always show a lot and that was so frustrating. I even rebelled against dietary restrictions when I was in college because I didn't feel like they were helping me."

Pete recalls how monumental it was when the glucometer and insulin pump came on the market. "Being able to monitor my glucose levels with a small device that pricks my finger and then gives an exact reading was hugely phenomenal. And the pump has eliminated the use of daily injections. Administering insulin was once very cumbersome and could create awkward moments at social events. The pump has made a tremendous difference."

Moving Faster: Why Pathway is so Important

There is one complaint that Pete and Linda have when it comes to diabetes research.

"Frankly, diabetes research is moving too slowly," said Pete. "We need the next big thing and to get that, we need to look at diabetes in a new way. That's one reason why Linda and I decided to make a substantial contribution to the Pathway to Stop Diabetes campaign. Investing in brilliant young scientists and pairing them with strong mentors really is a transformational approach to funding research. We believe it will be a game-changer and we wanted to back up our excitement with a large gift."

"The Pathway program shows that the Association is current in its thinking and recognizes that in all fields, breakthroughs tend to be made by younger people because they are not so set in their methods of discovery," Linda commented. "These young researchers embrace the notion of 'If there is a will, there is a way.' They believe that there is a cure for diabetes and that they will find it. Believing gives nourishment to pursue victory even though we don't know what the next chapter will bring."

The broad scope of the Pathway campaign also excites the Cummins. "The fact that Pathway has the goal of funding 100 researchers within the next 10 years is a big undertaking, and we need something big," said Pete. "Even though significant strides have been taken in diabetes research, no one would say they are satisfied with where we are now. We have to do more. And in order to do more, there needs to be a good plan in motion because promising a cure without having a plan is an empty promise. Pathway is built around a remarkable plan."

The Cummins are thrilled that Pathway is gaining support from corporations, foundations, and philanthropists and they encourage more people to give financially.

"Supporting Pathway to Stop Diabetes is an investment in hope," shared Linda, "and hope sustains those of us who live with diabetes every day."